Nicholas Kwiek lives in Laurium, Michigan, with his wife and three children and their two huskies. Nick is the Career Coach for TRIO Student Support Services and co-chair of the President’s Social Justice Task Force at Finlandia University. He is currently studying to earn his M.Ed. in Online Innovation and Design (ONID) through the University of Alaska Fairbanks eCampus. 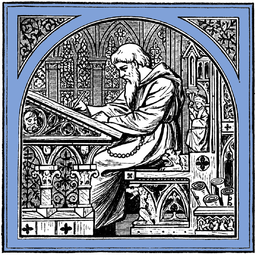 Before the invention of the printing press, there was no concept of copyright. Anyone in possession of a book or other written material had the right to copy it for his or her own use or to share. This is how the written word was spread and how it survived. With the exception of cases of censorship, there was very little interest in limiting the copying and transmission of written information.

With the printing press came the potential to create and distribute large numbers of books relatively efficiently. That potential needed to be controlled. Initially the control came in the form of censorship monopolies. In Tudor and Stuart Britain, the London Stationers Company was granted by the Crown exclusive rights to print all books in Britain. The Crown gave the company a monopoly in return for censoring books that would be harmful to the Crown’s interests. There were no protections for authors whatsoever, only a profitable monopoly for the publisher. This system collapsed around the time of the Glorious Revolution, just before 1700.

Back to
Making Sense of Copyright Home