Nicholas Kwiek lives in Laurium, Michigan, with his wife and three children and their two huskies. Nick is the Career Coach for TRIO Student Support Services at Finlandia University and is currently studying to earn his M.Ed. in Online Innovation and Design (ONID) through the University of Alaska Fairbanks eCampus.

Let me start with a brief disclaimer. Jeremy Scahill is not a tech visionary, educator, or innovator. He is a journalist. I decided to write about him here because I have noticed over the past few months that he does not shy away from covering the issues of digital citizenship that we discuss in this class. If you already know who he is, you are probably having one of three reactions: either you have already closed the tab, you are rolling your eyes so hard you can’t read this, or you are leaning into your screen in anticipation. If you do not know who he is, please let me introduce you to him.

Jeremy Scahill was born in Chicago in 1974. He grew up outside Milwaukee. His parents were both nurses and social activists. According to Wikipedia, he dropped out of college to work on social justice causes on the east coast. He became an intern at Democracy Now! and learned journalism “as a trade.” He was a war correspondent in the former Yugoslavia, Iraq, and Afghanistan, among other places. He has written three books, one on the private mercenary company Blackwater (Blackwater: The Rise of the World’s Most Powerful Mercenary Army, Nation Books, 2007) and two on U.S. execution of the “war on terror” (Dirty Wars: The World is a Battlefield, Nation Books, 2013; and The Assassination Complex: Inside the Government’s Secret Drone Warfare Program, Simon & Schuster, 2016).

In 2013 Scahill became one of the three founding editors, along with Glenn Greenwald and Laura Poitras, of The Intercept. The Intercept’s first big story, and its reason for starting, was the Edward Snowden revelations. Now it claims to be dedicated to “fearless, adversarial journalism.” Adversarial is a nice word for it: Scahill and his colleagues tend to question everyone and reject the commonly accepted line. They seem to enjoy exposing and challenging fake news that has worked its way into the mainstream media. And they are unabashedly leftist. 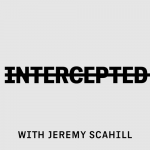 Scahill is currently in the second season of a podcast that he hosts for The Intercept called Intercepted. The podcast focuses largely on politics and national security issues, but lately that has inherently included a lot of cyber security issues. In a recent episode he interviewed Alison Macrina from the Library Freedom Project about personal digital privacy. Here is a clip of the interview, with some related material at the beginning:

You can find the full episode, “Dispatch from the Dirtbag Left,” from 21 June 2017 (explicit) here.

The most recent episode of Intercepted (“Dumb, Dumber and Don Jr.,” 12 July 2017) included a lengthy segment dissecting a fake news story that had been a headline on the Rachel Maddow Show the week before. The discussion between Scahill and Glenn Greenwald reminded me a lot of our reading from Collection II on Web Literacy. (If you are a fan of Rachel Maddow, you might want to skip that one. They are not kind to her.)

I follow Jeremy Scahill for his politics and foreign relations reporting. I follow him because he does not accept propaganda as fact. I appreciate his perspective.